How our service can help you

We provide a range of evidence-based care packages, tailored to meet the needs of the young person and their parents or carers.

Many of the young people we see are offered individual CBT, which may involve parents or carers and other family members.

We have an active research programme and are committed to increasing knowledge and understanding of the disorders we treat, and developing our treatments to help improve the outcomes for young people with BDD.

We also offer an extensive programme of training and consultancy in the assessment, treatment and management of different aspects of BDD through seminars, workshops, individual case supervision and research project supervision.

All service users referred to our service will be expected to maintain contact with their local CAMHS or GP service. These services will receive correspondence from our team throughout treatment.

We offer a specialised CBT treatment package to help young people to learn about and overcome their BDD. This involves:

Each young person works with their therapist at their agreed pace throughout the treatment; practising tasks together and agreeing tasks that can be continued at home.

Clinical questionnaires are completed at assessment and are repeated at the end of treatment, and at follow-up appointments.

The assessment in the clinic is tailored to the needs of the young person and will usually take about 3.5 hours. We ask parents to give a full account of the difficulties, and how they have dealt with these in the past. We also see the young person on their own to ask them about what they are finding challenging. At the end of the assessment, we meet the family to feedback our thoughts and to discuss our recommendations for treatment.  We will also feedback this to other professionals involved via a written report.

Our specialist treatment package of CBT involves meeting a therapist at the clinic once a week for an hour over an average of 20 sessions. We can also offer CBT over the telephone or video link, in an intensive format or during inpatient stay.

Medication can help some young people with OCD and other disorders. If medication is considered appropriate, this will be discussed fully with the young person and family at their assessment.

To make sure families are supported after treatment, we continue to review progress at 1, 3, 6- and 12-months following treatment. To assist this, we ask the young person and families to complete questionnaires at these times.

We regularly host teaching and skills-based training events on body dysmorphic disorder (BDD) both at our Maudsley site and in-house at child and adolescent mental health services (CAMHS) across the country.

Our training events focus on dissemination of our manualised clinic protocol, which has been evaluated through various audits and more formally in a RCTs (Mataix-Cols et al, 2015). Our standard full day training events will cover:

Our training events usually focus on either BDD or Obsessive Compulsive Disorder (OCD). We are able to offer teaching on both disorders as part of a combined event, but in order to do this we would need to reduce the scope of the teaching or extend the event across two days.

Please contact the clinic to discuss our availability and rates.

“Thank you. Such an excellent training day. Learnt so much but feel it was presented in a way that made it feel memorable and simple (though clear it wasn’t!). Confident, competent, interesting, enthusiastic, easy to listen to and inspiring speakers.”

“Scenarios and practical tips were fantastic”

“I have always had issues within myself. As far back as I remember I had never felt truly comfortable in my own skin. Things seemed to get worse as I started to go through puberty and dramatically changed when I entered my teenage years. I noticed rituals started to invade my life; I began obsessing over my clothes, hygiene and mainly physical appearance. I would spend hours staring in front of the mirror scrutinising every inch of myself. I would try anything to mask myself and to make me blend in; to fade into the background.

"My mum started to notice the changes that slowly crept over me; I couldn’t hide the chaos inside my head. She was concerned and wanted me to see a doctor. I became more and more withdrawn. I stopped leaving the house and began self harming. I blamed myself for everything; even things I knew deep down were completely out of my control. I was really scared but I knew I couldn’t continue like this. These changes in me where affecting my family and my friends. Everybody knew I was hiding my feelings but rather then talk about what was happening, I pushed everyone away. Luckily, I had such a supportive mum, she came with me to see our GP and I was referred to CAMHS [child and adolescent mental health services] for one to one counselling.

"By age 14 I was diagnosed with depression and had been prescribed antidepressants. Unfortunately the help I was getting only took the edge off. I continued to self harm and felt hopeless again as counselling was supposed to be my magical ‘cure’. Although some of the issues I had within myself were put to rest a lot more were uncovered.

"I ended up taking an overdose and my counsellor was worried about my safety. So then I was then admitted to Bethlem Royal Hospital’s adolescent mental health unit. I felt like I was trapped and being treated for a condition that was only a small part of a much bigger picture. So I plucked up the courage to see one of the hospital’s doctors. She asked me questions I hadn’t been asked before, ones I hadn’t even asked myself. Suddenly things made sense; there actually was an explanation for my behaviour!

"The doctor told me that she thought I had something called body dysmorphic disorder. I had no idea such a thing existed but when the doctor told me there was a chance I would be part of a research trial, I grabbed the opportunity with both hands. Luckily I was accepted and began a course of CBT [cognitive behavioural therapy] at the Michael Rutter Centre. I had to travel to the clinic by two trains each way but it was worth every second as I quickly saw the treatment was having a positive effect.

"I had one to one sessions with Dr Laura Bowyer. She spoke with obvious passion and genuine concern. She gently encouraged me to step outside my comfort zone with exposure tasks but she never pushed me. She always spoke to me as an equal and if it wasn’t for Laura and the Michael Rutter Centre I don’t know where I would be today. I was convinced my problems were real and not something in my head that could be treated. But it was psychological and was very treatable. I am proof that CBT for BDD really works. I have turned my life around in every possible way.”

A parent's story of BDD:

“Megan is the middle of three children and has dyslexia. Her brother and sister both have Aspergers and ADHD [attention deficit hyperactivity disorder] and I always thought of her as the ‘normal’ one. Her BDD developed over a few years, around puberty. At first it wasn’t a problem, but as time went on it began to affect her more and more. She became more and more withdrawn, sometimes not leaving the house for days.

"It was still a huge shock when I discovered she was self harming, after visiting our GP, she was referred to CAMHS who diagnosed her with depression and put her on anti depressants & gave her one to one counselling. This helped a little but she still occasionally cut and one evening took an overdose. As a result she was admitted to a children’s mental health unit as her CAMHS worker felt she was a danger to herself.

"While in there she met a lovely doctor who diagnosed her with BDD and told us about the Michael Rutter Centre and a research project they were doing. She kindly referred Megan to the project and to our delight they accepted her.

"The journey to the centre took two trains and a couple of hours but it was worth it! During the sessions she was given specialist one to one cognitive behavioural therapy tailored to her problems. I noticed a difference in her behaviour after the first few sessions.

"Since finishing the course Megan has totally transformed her life. She has more confidence and when she is faced with a problem that in the past she wouldn’t have been able to cope with, she uses the techniques the Centre taught her and deals with it with minimum fuss or stress.

"Megan has now moved out of the family home into a flat with her fiancé and has a baby – something she wouldn’t have been able to cope with such a short time ago. I am so proud of her and grateful to the Michael Rutter Centre for all their help.”

“I have to do my hair every morning until it looks right… This means washing, straightening, styling, and then starting again if it doesn’t turn out. Usually I don’t get into school before lunch time.” - Steven, 17 years old

“I’ve always hated my chin. I think it’s too big and juts too far out. It’s humiliating because I feel like everyone notices how big it is. I feel like a walking chin sometimes…” - Jamie, 15 years old

“I just feel ugly. My face doesn’t go together properly. My nose is too big, my eyes too small, and my forehead’s too wide. I hate looking in the mirror.” - Ruby, 17 years old

“I really don’t like my hands. They’re too big and masculine looking. I wear gloves whenever possible and keep them in my lap at all times during school. I’m always comparing my hands to the girls in my class – I feel like my hands are disgusting compared to theirs. I think I’d cry if I had to write on the board in front of everyone.” - Gemma, 14 years old

There is a national service for severe and treatment-resistant OCD, funded by the NHS England, for young people meeting the following eligibility criteria:

Any young person fulfilling these criteria can be referred to us for assessment and treatment. 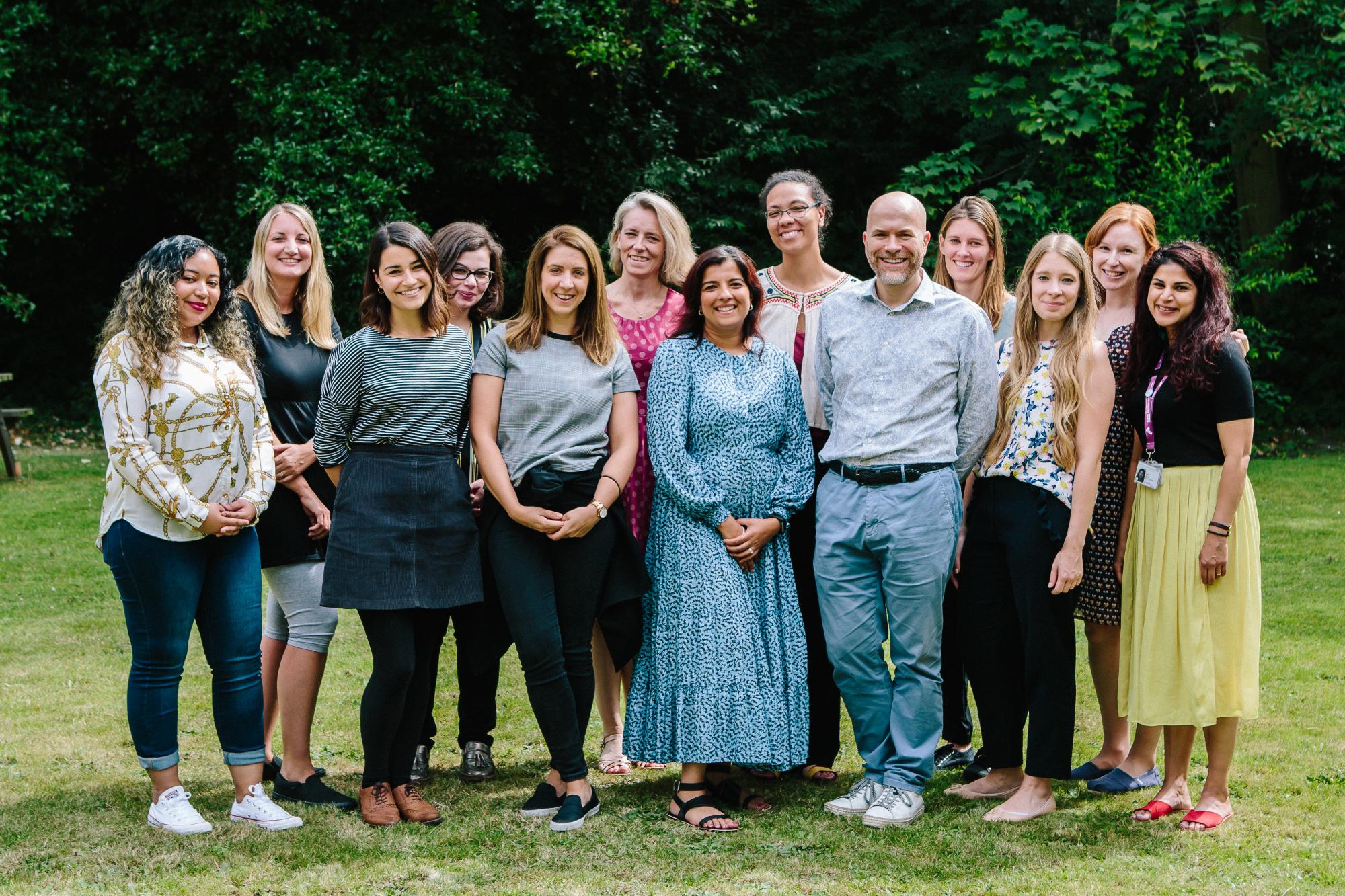